AFTER two challenging years of start-stop Covid-19 restrictions, the travel industry is sputtering to life again as borders across Southeast Asia reopen in rapid succession in recent weeks.

“I feel like screaming for joy at the top of my lungs to say that recovery has finally arrived in our region, and more importantly, we truly believe that it’s here to stay,” Hermione Joye, sector lead of Travel & Vertical Search APAC at Google said in her opening statement at ‘Asia Arising: Reopening Safely & Emerging Stronger’, a hybrid conference organised by organised by WiT and Travel Weekly Asia on April 22.

“The release of travel restrictions across Southeast Asia has meant the pent-up demand has finally converted to realised demands,” Joye said. “People get to take action and they’re doing it really fast. Because governments have eased restrictions, it means that individuals are feeling safer about travelling more freely.”

Singapore is a prime example of this. When Singapore announced on 24 March that the country will open to vaccinated travellers from around the world beginning 1 April, Google saw a 107% surge in search queries for the destination just three days after the announcement.

Google’s data also reveals that Australia is leading the recovery, closely followed by Philippines and Indonesia. Other Southeast Asian countries are similarly showing healthy returns for both outbound and inbound travel, which translates to more regional traffic and travel, and a greater willingness for long-haul travel.

“The revenge traveller is sitting in the Australia and Southeast Asia regions” she added, “and we need to go after them and make their experiences exceptional.”

Joye revealed that in March, the top three markets for outbound traffic to Southeast Asia and Australia were Bali, London and Singapore. 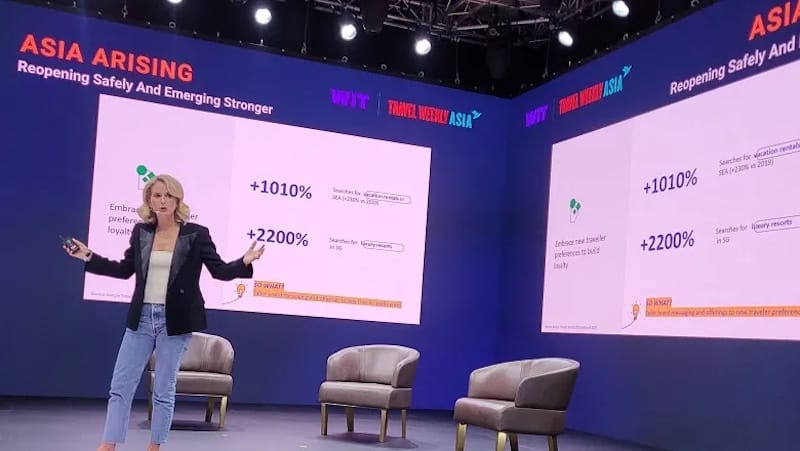 During the pandemic, more than 440 million people came online just in South-east Asia, and internet penetration has soared past 72%, according to Joye.

The digital acceleration has resulted in digital dependency, especially in Asia where “there are very few moments that we experience now that don’t have some type of digital engagement, between maps, payments, security check-ins, reviews, entertainment and social media and video, you will need to have digital touchpoints to make your experience complete.”

Interest and search queries are being converted into bookings faster than ever before. People are now booking travel in under 60 days, where as previously before Covid, it takes a traveller approximately 70 days from their first Google search of a destination to follow up on making travel arrangements.

“It means you need to be moving fast especially when consumers are researching and taking action,” Joye said. “If you want to win the hearts and minds of travellers, it’s crucial to be digitally prepared.”

* This article was first published in Travel Weekly Asia.